Home/Technology/History of the Caucasus: Volume 1: At the Crossroads of Empires, reviewed
Previous Next 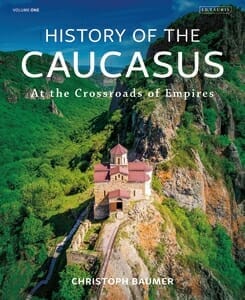 A fascinating book with glorious photography in it, written by Christoph Baumer.  History of the Caucasus: Volume 1: At the Crossroads of Empires, is published by I.B. Tauris see more here.

Coming in at over three hundred pages, with another hundred pages of footnotes, chapter notes and bibliography, this is an extensive and meticulously compiled book. It is also only volume one too, of what could be a really informative and comprehensive guide. Just to mention it again the images and illustrations in the book are often breathtaking at times, and really illuminate and make it a pleasure to read this book. It will surely become a go-to book for those looking to form an overview and in-depth understanding to this part of the world. Well worth reading.

Christoph Baumer is a leading explorer and historian of Central Asia and his previous texts, a four-volume set on the History of Central Asia, has become a seminal writing on the region. This latest work, the History of the Caucasus, is a sweeping, and beautifully illustrated, in-depth look at a land brought richly to life as he explores the stories of a site and its people which have been claimed by rival Empires and nations for thousands of years.

A landscape of high mountains and narrow valleys stretching from the Black to the Caspian Seas, the Caucasus region has been home to human populations for nearly 2 million years. In this richly illustrated 2-volume series, historian and explorer Christoph Baumer tells the story of the region’s history through to the present day.

It is a story of encounters between many different peoples, from Scythians, Turkic and Mongol peoples of the East to Greeks and Romans from the West, from Indo-European tribes from the West as well as the East, and to Arabs and Iranians from the South. It is a story of rival claims by Empires and nations and of how the region has become home to more than 50 languages that can be heard within its borders to this very day.

This first volume charts the period from the emergence of the earliest human populations in the region – the first known human populations outside Africa – to the Seljuk conquests of 1050AD. Along the way the book charts the development of Neolithic, Iron and Bronze Age cultures, the first recognizable Caucasian state and the arrival of a succession of the great transnational Empires, from the Greeks, the Romans and the Armenian to competing Christian and Muslim conquerors. The History of the Caucasus: Volume 1 also includes more than 200 full colour images and maps bringing the changing cultures of these lands vividly to life.

Christoph Baumer is a leading explorer and historian of Central Asia. He is President of the Society for the Exploration of EurAsia and is a member of the Explorers’ Club, New York, and of the Royal Asiatic Society, the Royal Geographical Society and the Royal Society for Asian Affairs, London.