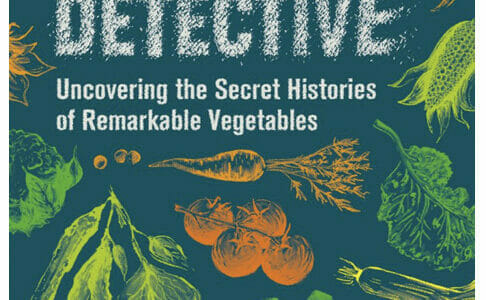 This might be too early for a stocking filler, but it is a fun and thought provoking tour of some of the world’s most beloved vegetables and plants that have sustained us for millennia. See more about The Seed Detective, Uncovering the Secret Histories of Remarkable Vegetables on the Chelsea Green website here.

This is a fun and thought provoking book. All the more poignant as the author is originally inspired to embark on his seed collecting odyssey by an old and wise and Ukrainian grandmother he meets once up a time in the old Soviet Union. From these unplanned beginnings he dives deeper into the weird and wonderful world of plants we eat and their origins. Seed diversity is a global concern and books like this help to flesh out the value, in so many ways of knowing, understanding, and advocating for seed saving, biodiversity and avoiding a monoculture of our crops, plants and minds also.

We enjoyed this book, and will definitely we recommending to green fingered people in our community and the wider world too. Well worth reading and, or giving to a loved one as a present.

‘One of the most inspirational books I have encountered.’ Darina Allen

‘If you’re a vegetable growing addict or just curious about their origins, there’s something for everyone in Adam’s new book.’ Rob Smith, TV presenter

Meet the Indiana Jones of vegetables on his quest to save our heritage produce.

Have you ever wondered how everyday staples such as peas, kale, asparagus, beans, squash and sweetcorn ended up on our plates? Well, so did Adam Alexander. Adam’s passion for heritage vegetables was ignited when he tasted an unusual, sweet and fiery pepper while on a filmmaking project in Ukraine. Smitten by its flavour, he began to seek out local growers of old and near-forgotten varieties in a mission to bring home seeds to grow and share – saving them from being lost forever.

In The Seed Detective, Adam tells of his far flung (and closer to home) seed-hunting adventures and reveals the stories behind many of our everyday vegetable heroes. How the common garden pea was domesticated from three wild species over 8,500 years ago, that the first carrots originated in Afghanistan (and were actually purple or red in colour), how Egyptian priests considered it a crime to look at a fava bean and that the Romans were fanatical about asparagus.

Join The Seed Detective as he takes us on a journey that began when we left the life of hunter-gatherers to become farmers. Sharing storiesof globalisation, political intrigue, colonisation and serendipity, Adam shows us the vital part vegetables have played in our food story – and how they are the key to our future.

In his new book "The Seed Detective, " Adam Alexander @vegoutwithadam dives into the history behind vegetables while traveling the world hunting for their seeds.

His collection now boasts seeds for more than 500 plant varieties.

More about the author

Adam Alexander is a consummate storyteller thanks to forty years as an award-winning film and television producer, but his true passion is collecting rare, endangered but, above all, delicious vegetables from around the world. He lectures widely on his work discovering and conserving rare, endangered garden crops, is a board member of the national charity Garden Organic, and his knowledge and expertise on growing out vegetables for seed is highly valued by the Heritage Seed Library, for which he is a seed guardian. Adam shares seeds with other growers and gene banks in the USA, Canada and the EU, and he is currently growing out seed of heritage Syrian vegetables to be returned to the Middle East as part of a programme to revive traditional horticulture. He has appeared on Gardenersí World and the Great British Food Revival, CNNís Going Green and Radio New Zealand.